Santa Cruz is the most central island, and has the largest population in the archipelago. Puerto Ayora is the main and largest town in the Islands. This is also the home of the national park headquarters and the Charles Darwin Research Station.

One of the most visited places on the islands, this is actually a non-profit scientific station rather than a tourist site. One of the most popular sections is the Fausto Llerena giant tortoise-raising centre. Giant tortoises are raised here then translocated to other islands to repopulate the species. You will come away from here with a good idea about the geology, history and conservation projects of the islands.

The highlands reach up to almost 900m and are in the northeast of the island. As you travel up here you pass through various vegetation zones, and the birdlife is excellent with vermillion flycatchers, woodpecker finches as well as many other species. Up here you can also come to the reserve to see giant tortoises. You walk in the often misty native vegetation and hope to come across one of the tortoises. Some of the farms adjacent to the reserve also let people on their land and the tortoises often wander across the farmland too.

Also in this area you have the chance to go into some of the giant lava tubes. These strange tunnels were formed as lava was cooling at different rates on the outer edges to the deeper hotter parts, sometimes forming large caves in the process.

The Twins are two large craters which were formed when huge magma craters collapsed in on themselves. They are just on the side of the road from Puerto Ayora to Baltra, and you can stop and walk around the rims. On your walk you might see vermillion flycatchers, short-eared owls, Galapagos doves and several finches.

This quiet cove in northeast Santa Cruz is a special place. Boats have to cut their engines here so as not to disturb the inhabitants. By doing this, you are often rewarded with the sight of green sea turtles coming up for air close by, or spotted rays gliding past. You might also see a shark here (black-finned, white-tipped reef or Galapagos sharks).

(Wet landing) This is a great place to come swimming and snorkelling, and the white sandy beach is a favoured nesting site for sea turtles. The great flamingo is also found here, and a saltwater lagoon behind the beach is often a good place to spot blue herons, white-cheeked ducks and small waders. ‘Las Bachas’ (a mis-pronunciation of ‘barges’) are actually the remains of a World War II floating barge dock left by the Americans 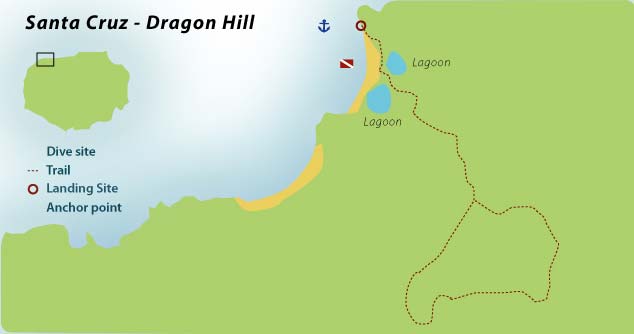 A successful conservation story, Dragon Hill (dry landing) as the place where the elimination of feral dogs allowed the re-population of orange-yellow land iguanas to be undertaken. A breeding programme run by the Charles Darwin Research Station replenished the numbers which were then repatriated to Dragon Hill.

The beach at Whale Bay (wet landing) is green-coloured because of olivine crystals in the sand. It is less of a site for wildlife and nature, and more of a historical site. Some evidence of occupation can still be seen here in such things as ceramics (not to be touched) from the mid-1800s. It’s a pleasant place to wander for a while.