The main highlight is the flamingo lagoon. As well as these colourful birds you should see numerous ducks and finches.
MENUMENU

Floreana has an interesting human history. It’s the site of the first post office in the islands and the birthplace of Rolf Wittmer, the first person born in the Galapagos, whose descendants still live here today. 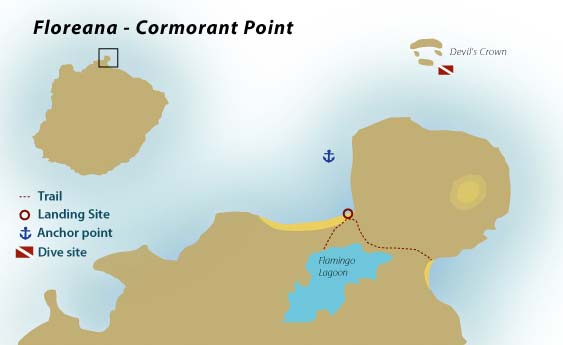 Cormorant Point (wet landing) has two beaches, one covered in sand rendered green by crystals and the other, a white coral beach. Turtles and rays are often seen in the water here. The main highlight is the flamingo lagoon. As well as these colourful birds you should see numerous ducks and finches but strangely, given the name, no cormorants.

You can visit Post Office Bay (wet landing) and leave your own card, maybe selecting one from the many others left here that you can deliver back home in a tradition dating back to the early 19th century. If you’re feeling adventurous you can walk to a lava tube, descend a ladder and walk through it for several hundred metres. It’s quite an eerie experience and you’ll need a torch!

Baroness Viewpoint is named after a one-time Floreana resident, a flamboyant Austrian woman who arrived with her entourage and subsequently mysteriously disappeared leaving a whiff of scandal and rumours of murder most fowl. You’ll see the remains of her house her and can follow walking trails leading to great views.

Landing at the port of Puerto Velasco you can be driven to Cerro Alieri where you’ll see some forty-eight species of indigenous plants. You can also visit Asilo de la Paz, a tall lava cone. This is the site of the fresh water spring that is the main water source for the population. There’s a cave that was once inhabited by pirates plus a colony of giant tortoises.

There are several marine sites off Floreana, accessible to snorkellers and divers including Devil’s Crown a submerged volcanic crater. You can also take dinghy rides around Gardner Islet to see caves and fascinating rock formations. Gardner is also home to the rare and endangered Floreana mockingbird.