Boobies are large seabirds, usually between 70 and 80cms in length, with long bills, short legs and big webbed feet.

Seen in flight they have long, pointed wings and wedge-shaped tails. They are great flyers and can reach high speeds in the air. They feed at sea, diving from a height into the water to pursue and catch prey with their sharp beaks. The name derives from the Spanish word meaning stupid or clown, due to their awkward, clumsy gait on land. There are 3 species of boobies in the Galapagos. 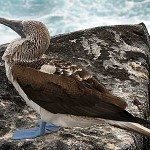 Blue-footed boobies are found throughout the islands. Males and females look alike with light brown heads and necks and white bellies. Males perform a  mating ritual that involved lifting their colourful feet and waving them in the air. The feet can vary from pale shades of blue to a darker hue, with females tending to have more brightly coloured feet than males. The colour is due to carotenoid pigments from the bird’s diet. Like other boobies, they nest in colonies throughout the year and stay close to their own nesting sites. There are estimated to be some 10,000 pairs in the Galapagos. 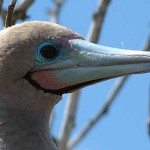 Red-footed boobies have either brown or white plumage, brown being the predominant colour in the Galapagos Islands, and blue bills. As their name suggests, they have bright red webbed feet. They have a similar courtship display to blue-footed boobies. Unlike other boobies, they nest in trees rather than on the ground, with females laying a single egg that is incubated by both adults for up to 46 days. It is about 5 months before the young bird can fly fully. They feed well away from land. There are thought to be about 15,000 pairs in the islands, they are less often seen in water near the islands. They are the smallest of the boobies.

Genovesa, San Cristobal all have colonies of Red-footed boobies. 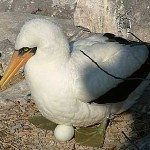 The Nazca booby is black and white and has an orange beak. Females lay 2 eggs, several days apart, which hatch at different times. Often the older chick will push the smaller out of the nest, leaving it to starve and die, as the parents do not intervene to save it. The 2 egg policy means that should something happen to the older chick and it dies soon after hatching, the younger one will survive. Breeding occurs at different times of year on different islands. There are thought to be between 25,000 and 50,000 pairs in the islands.